The Science Behind Storytelling

In the summer of 2000, when I was around 10, I lived in a small suburb west of Dallas. In those halcyon days, we were just a class of kids pouring out onto the street to play foursquare, ride skateboards, and gossip behind swing sets until dark. It was still that prickly age where we were too young to care about how cool we were. And to that end, I was aggressively uncool. (Re: the picture below of me dressed as a witch with all of my friends). 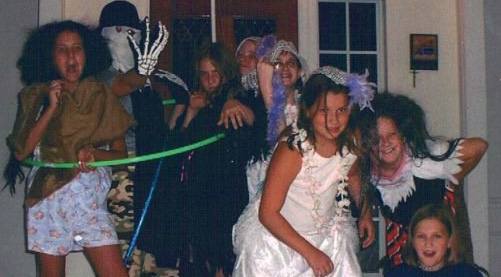 I would wake up at 8am with a fresh idea, write it down, and then sprint, shoeless, to my friends house. After crafting the storyline, we’d plan out our dream cast: Leonardo DiCaprio, Morgan Freeman, Meryl Streep. We’d draw up costume ideas, pen the screenplay and bring in our neighborhood friends. We’d sit down our parents, draw the curtains, and watch it all play out.

It was a process that brought the whole neighborhood to one place. Looking back now, the performances were not, well, amazing. But they were a community staple that blended all walks of life; and when we got it right, it was a welcome escape from the blistering heat outside.

It’s in the spirit of NaNoWriMo (National Novel Writing Month) which I practice that art again. If the most intimidating thing is the blank page, then I’m trying out the art of waking up, writing it down, and sprinting to whomever might listen--this time with shoes on.

It's in all of this I wonder: what is it that makes a good story worth reading?

Motivation is often described as the reason for a character to act, think, and narrate in a certain way. In Westworld, this is openly talked about in terms of backstory -- providing their characters with a launching pad for any and all actions after the fact. They actually made it a plot device rather than just break the fourth wall entirely. Motivation is also a method by which we can better relate to the characters themselves, allowing us to dive head first into the narrative and remove all preconceived beliefs we might carry.

It’s that common adage of “show, don’t tell”, popularized by Anton Chekov, that writers use to help readers become immersed. So if someone is telling you what the character looks like, and explains their motivations for doing things, it often comes off as cheap or hollow. But power it with a motivation via backstory and you have the beginnings of your first act in a play.

Classically, conflict and tension typically take a story and break it up into three main acts: introduction, conflict and resolution.

Literary conflict is commonly defined as, “an inherent incompatibility between the objectives of two or more characters or forces. Conflict creates tension and interest in a story by adding doubt as to the outcome.”

One professor at Claremont Graduate University, Paul J. Zak, set out to study why humans react strongly to tension in storytelling. His team found that when the chemical Oxytocin gets released in our brains in any given interaction, it essentially tells us that it’s “safe to approach others”, as a sort of key to empathy and understanding, or as if to say, “this person is trustworthy”. To see if this happens with storytelling, Zak tried a few methods:

“We tested if narratives shot on video, rather than face-to-face interactions, would cause the brain to make oxytocin. By taking blood draws before and after the narrative, we found that character-driven stories do consistently cause oxytocin synthesis. Further, the amount of oxytocin released by the brain predicted how much people were willing to help others; for example, donating money to a charity associated with the narrative,” says Zak. “We discovered that, in order to motivate a desire to help others, a story must first sustain attention – a scarce resource in the brain – by developing tension during the narrative.”

Contrary to popular belief, stories can, in fact, exist without conflict, and are oftentimes divided up by two acts instead of three. However, conflict and tension are key tools that take a reader through a short story like The Yellow Wallpaper and give them a new frame-of-reference for understanding the importance of better mental health programs. Conflict takes a story and brings it into a reality where the reader can transform and interpret what it might mean to them in terms of change, action, or confirmation.

Storytelling has been around since the dawn of mankind, and even predates the written word. Back in those days, storytelling started as a dance, or was conveyed through hand gestures. This evolved into rock art, wall paintings, and then into a more formal language.

In all ways, in all of those methods of communication, there has been one basis for a good story: emotion. There’s no consensus on what makes up “emotion” as it exists in our collective unconsciousness, but most scholars agree that it’s generally powered by mood, temperament, personality, disposition and motivation. It’s also seen in measures of sadness, joy and humor.

It’s that very humor in Metro Trains’ “Dumb Ways To Die” campaign that makes it memorable, landing it in top 15 lists in AdAge and other publications:

It’s the confidence and empathy in Dove’s “Real Beauty” campaign that make it a hallmark of the best ad campaigns in the last century:

It’s also the emotional heft and character motivation when Procter & Gamble Co.’s “Thank You Mom" campaign compares the nostalgia of an Olympians childhood to their current feats of human strength that land it in the ranks among the greatest ad campaigns of all time:

It’s the motivation, tension and emotion in a story that inspires reaction, change and movement. It’s these literary devices that releases oxytocin and drives both personal and societal change. It’s all of these parts that make a story whole, and reshape the way we perceive reality, all for the better.

The Start Up Journey